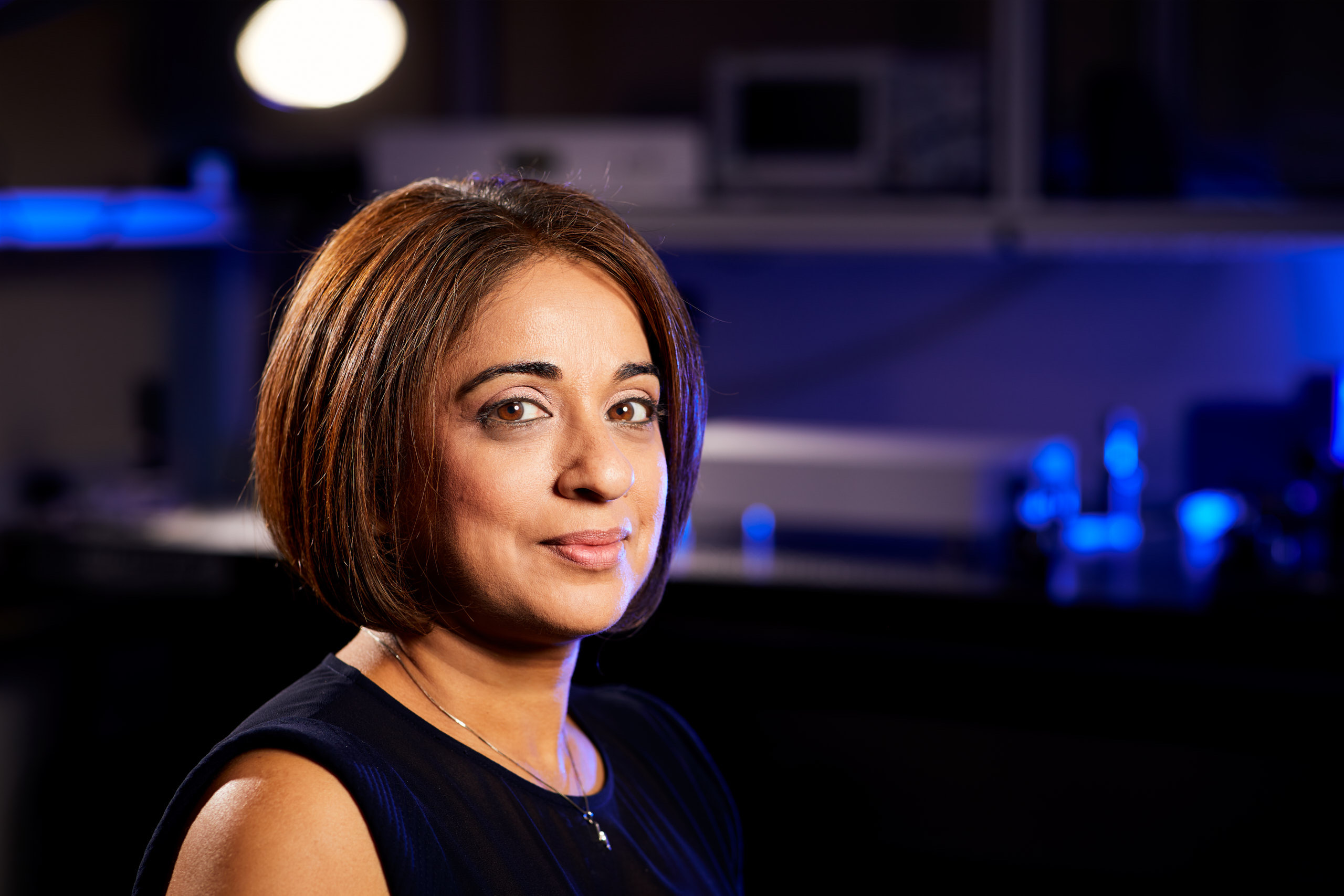 17 Mar An interview with the Chromacity CEO

Posted at 10:01h in Blog by Mike Dalgleish

In this article, we spoke with the Chromacity CEO, Shahida Imani, about life at the helm of the ultrafast laser manufacturer.

In 1996, not long after graduating from Edinburgh’s Heriot-Watt University with a BA in Accountancy and Finance, Shahida became the financial controller of Optos, a company specialising in retinal imaging devices. Optos had been set up in 1990 by Douglas Anderson, who set out to develop a patient-friendly retinal imaging product that encompassed a digital ultra-widefield image of the retina.

Over the next five years, Optos grew rapidly to 85 employees. The company was later floated on the London Stock Exchange and is now owned by Nikon. For Shahida, helping the company achieve its mission of making life-changing technology available to everyone was an exciting journey and shaped her future career. As she recalls: “I learned a lot along the way, not just about the financial aspects, but also the technology, manufacturing and commercial strategy.”

It was also Shahida’s first glimpse into photonics, where she was inspired by some of the people that worked in the company. “It was this experience that encouraged me to continue working with high growth companies in the technology sector”.

Her next position was Group Financial Controller for Voxar, another Scottish start-up, created in 1995 to meet demand in the medical sector for 3D imaging systems. This was another success story due to the company’s spectacular growth and eventual acquisition by Canon, which transformed Voxar into a centre of excellence for research and development of 3D imaging software.

In 2008, Shahida set up her own CFO advisory service. This led to her gathering a lot of experience across sectors including educational software, medical life sciences and machine vision, where her role as CFO at Odos Imaging saw the company grow rapidly again before its eventual acquisition by Rockwell Automation Inc. During this time Shahida also served as a member of the Innovation Exploitation Board for Heriot-Watt University and was a judge on the Converge Challenge, Scotland’s largest entrepreneurial training program.

One of the companies on Shahida’s watchlist was Chromacity, which was a runner-up in the Converge Challenge in 2012 and was eventually spun out in 2013 by co-founders Dr. Christopher Leburn and Dr. Carl Farrell. Their vision was to design and manufacture a range of ultrafast lasers for scientific and industrial applications, making them more compact and affordable than existing solutions in the market. As they started to grow the business, the co-founders invited Shahida to join the company, initially as CFO, but later, in 2018, she was appointed CEO. As she explains, while the company had reached a milestone in its journey, successfully transforming the academic research from humble beginnings at Heriot-Watt University, it was recognised a different skill set was required to take the company to its next phase. So the decision was made to hand the baton over to someone who had the commercial and strategic skills to take the company to that next step.

Over the next two years, Shahida focused on putting infrastructure in place to enable the company’s next phase of growth. The first priority was to move away from developing bespoke lasers to a scalable range of commercial products, which now includes tunable near-IR and mid-IR optical parametric oscillators, and fixed wavelength femtosecond lasers. The vision is to not only provide reliable, best-in-class ultrafast lasers, but to back them up with a customer support service that provides a seamless journey for the customer. “We work closely with customers to ensure they understand what the systems are capable of, and how easy they are to use,” says Shahida. “They know that their team of customer support and technical experts are always on hand should they need them, which is remarkably not very often, given the technical complexity of the products.”

“In order for Chromacity to demonstrate its commitment to quality and reliability, it was imperative that we achieved our ISO 9001:2015 quality standard,” she adds. “The embodiment of this was ensuring that we promoted the culture of continuous improvement within the company, hence all our employees are trained in internal auditing and we take this aspect very seriously. The final, but the most important point, was to ensure Chromacity has a strong team culture, the core foundation of which is effective communication at all levels. There is no doubt in my mind that this is the cornerstone to success for any company.”

Chromacity’s principle aim over the next five years is to accelerate growth by focusing on four key areas:

One of the main changes Shahida has made since becoming CEO is to use Chromacity’s experience and success in imaging and microscopy as a springboard to explore other application areas. These include new technologies for next-generation solutions in manufacturing and industrial processes as well as new medical applications.

Another growth area is environmental monitoring. Chromacity is set to exploit this technology via its strategic relationship with the Institute of Photonics and Quantum Sciences (IPAQS) at Heriot Watt University, which will enable the company to fully explore the commercialisation of remote sensing and spectroscopy for environmental applications.

Two other markets with the potential for exceptional growth are agritech and quantum technologies, and Chromacity aims to pioneer new solutions in both sectors. However, as Shahida points out, while the development of agritech applications is already underway, from a commercial perspective, quantum technologies are still very much in the research and development phase, and still need to be fully validated and certified.

To stay ahead of the game in an increasingly competitive market, the company hired an experienced head of manufacturing whose focus is on streamlining processes to enable economies of scale and optimise the design-to-manufacture process. This will become increasingly more important as the company intends to deliver new products to the market on a much more accelerated scale.

Over the next 12 months, a major goal is to accelerate growth in East Asian markets, with a specific focus on China. Chromacity is developing a strong network with trusted local agents and channel partners in key areas. “We are careful on who we work with, to ensure that our brand and reputation are protected, but also ensure our technical excellence is not compromised or diluted,” says Shahida.

Shahida is confident that all the groundwork has been done to successfully attract the future investment required for the next phase of company growth. As she says: “We’ve got the right infrastructure in place before you can take that next step. The last two years have been spent making sure this has been addressed. We have one of the most stable and reliable ultrafast laser technologies available, a clear commercial strategy and we are perfectly positioned in the market to accelerate our growth.”

When asked if there was anything she’d have done differently, Shahida says, “Looking back, I think most of my moves have been the right ones. I’ve made a few mistakes – who hasn’t – but I have always taken the opportunities that would help me grow and accelerate my knowledge in key aspects of business. I’ve learned more about how the markets operate, about the commercialisation of products, the importance of a team culture, and how it all fits together through all of my different experiences. Of course, if I’d  known all this 20 years ago, perhaps I could have been more effective, but wisdom always comes with age … so they say!”

Shahida’s advice for the next generation of entrepreneurs is clear.

“First, never give up; keep trying and work hard. Second, keep learning – not just about the technology and the business side, but about yourself. Embracing the capability to develop ourselves allows us to reveal knowledge – and that is where the real talent lies. It allows you to unlock and apply these talents to make the contribution and have the impact we want – and hopefully achieve happiness and success on terms that we define. I think this is really important because you’ve got to have a sense of who you are and what you want, as well as how you can drive the business forward”.

“Third, although I’ve mainly been involved in success stories, hidden underneath has been a lot of failure. I know it’s a cliché to say you learn more from the things you get wrong than the things you get right; but if you can turn them into positive learning experiences, you’ll come back stronger and build up your resilience”.