Chromacity is a leading manufacturer of high-performance optical parametric oscillators for scientific and industrial communities worldwide.

What is an Optical Parametric Oscillator?

An optical parametric oscillator (OPO) is a coherent light source that makes use of a parametric amplification process to generate light, over a wide range of wavelengths. Optical parametric oscillators consist of a nonlinear crystal, placed inside a cavity, which is pumped by a fixed wavelength laser. The OPO technology generates light across optical frequencies within the mid-IR spectrum, which conventional lasers cannot easily access.

Due to their tunable wavelength coverage, optical parametric oscillators have been used across a range of test and measurement, materials characterisation and spectroscopy applications. These techniques help to determine failure analysis within the semiconductor industry and detect gas emissions from asset intensive industries.

Within industrial sensing, OPOs can be integrated with interferometers (and other detector technology) to establish a high brightness detection system, capable of identifying and quantifying hydrocarbons in the atmosphere simultaneously. Demonstrating these capabilities, Chromacity collaborated with Heriot-Watt University to conduct research into multi-species gas analysis using FTIR spectroscopy and stand-off detection techniques.

Within the molecular fingerprint region, typically wavelengths between 5 – 15 µm, more complex chemical compounds can be detected. Using a nonlinear orientation patterned gallium phosphide crystal (known as OPGaP), Chromacity’s picosecond optical parametric oscillator can be extended to generate light up to 12 µm, to detect chemical signatures (in solid or liquid state). These chemical signatures can be harmful to people and contaminate surfaces during assembly line production.

Chromacity manufacture a new generation of tunable ultrashort-pulse lasers by leveraging the technical expertise and capabilities of their R&D team. Patented protected IP has captured innovation within Chromacity’s manufacturing processes, and this has been vital to the design and build of high performance OPOs which are more efficient, stable and simple to use when compared with substitute technologies operating at similar wavelengths.

Bespoke design and optical component selection rival the conventional size and stability of alternative technologies, particularly Optical Parametric Amplifiers (OPAs). Chromacity’s OPO technology is driven by an integrated pump source (Chromacity’s 1 µm femtosecond laser) to form a compact and robust solution, with fibre coupled options available for maximum stability. Combined with air-cooling functionality, which negates the need for water storage and waste as a by-product, Chromacity’s ultrafast OPOs are one of the most compact available.

Chromacity is recognised as one of the first laser manufacturers to achieve remote installation capability for ultrafast OPOs.

“Remote installation worked perfectly and we had the OPO system up and running to use in our experiments in
no time at all.”
– Bristol University 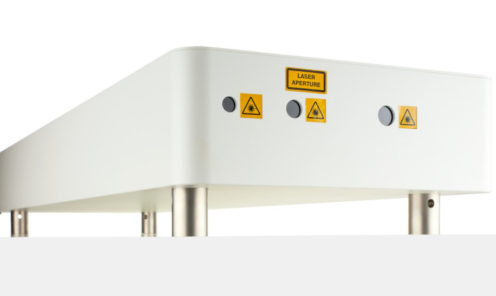 Equally, the OPO’s plug and play functionality is controlled by an intuitive web-browser interface to accelerate the operational readiness of the system, straight out of the box. The ease of use, which is a hallmark of Chromacity’s OPO technology, removes barriers that researchers often encounter when operating OPAs, which are often complex to set-up.

Optical parametric oscillators provide an alternative to laser sources which span the near to mid-IR wavelength regions. Quantum Cascade Lasers (QCLs), for instance, are used to support research within 5 – 6 µm, however, the brightness of the technology is restrictive, and investment in multiple QCLs is necessary to match the broad wavelength tunability achieved from a single OPO.

In addition to broad tunability, OPO technology delivers higher powers when compared with alternative technologies. Chromacity’s OPO technology delivers more power per nm when compared with Supercontinuum sources, which peak typically around 4 mW per nm. Supercontinuum lasers are a fixed wavelength source which is tunable to specific wavelengths by applying a filter. Although broad wavelength coverage can be achieved, power is diminished as a result.

For more information about Chromacity’s optical parametric oscillators, and for pricing, email: sales@chromacitylasers.com